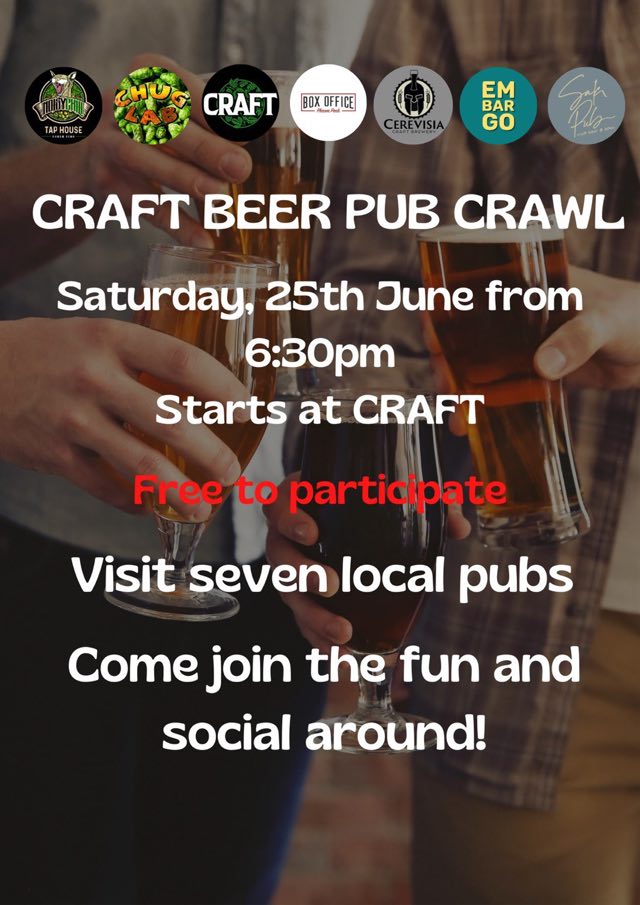 The Phnom Penh Craft Beer Pub Crawl is Returning to Embargo. The first two ones were a success and now we´re repeating it on the 25th of June 2022.

Craft beer in Phnom Penh is becoming more and more popular. There are many new craft beer bars opening up and that’s why we want to help you try them all!

The Phnom Penh Craft Beer Pub Crawl is a great way to explore the city’s craft beer scene. We will visit Craft, Chug Lab, Craft, and Noisy Chili Taproom among others.

For those unfamiliar with the concept of a pub crawl, it’s basically a guided tour of some of the best bars in town. Of course, there will be plenty of opportunities to sample the wares on offer. And best of all, our pub crawl is completely free to join. We’re starting at 6:30 pm from Craft in Palace Lane.

We’ll visit a total of 6 of the best craft beer bars in Phnom Penh. Here are some of them.

That’s us! A cosy little craft beer bar that is perfect for hanging out with friends. We have a great selection of beers, including 9 taps and a fridge stocked with more than 30 local and international craft beers.

If you like craft beer and heavy metal, look no further! This place has the best of both worlds. It’s a small but cosy place and you would have a hard time finding them without help.

Craft is owned by the same people as Fuzzy Logic. They don’t only serve Fuzzy beers though, they also have beers from other Cambodian craft brewers and delicious American BBQ.

Noisy Chili Tap House is a haven for beer lovers in Phnom Penh. This is the official Riel Brewing taproom. They are passionate about craft beer and they love to share their knowledge and enthusiasm with their customers

You don’t need to register for the event so see you on the 25th!

Check our blog to read more about Craft Beer in Cambodia.